Dr. Koenig, president of JenLab is Most Innovative CEO, Germany

Winner of the Most Innovative CEO award, Germany, Karsten König has a life rich in challenges and extraordinary research with his business JenLab GmbH developing outstanding scientific methods for detecting skin cancer and testing cosmetic efficacy. 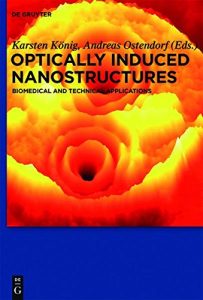 Nanostructuring of materials is a task at the heart of many modern disciplines in mechanical engineering, as well as optics, electronics, and the life sciences. This book includes an introduction to the relevant nonlinear optical processes associated with very short laser pulses for the generatio of structures far below the classical optical diffraction limit of about 200 nanometers as well as coverage of state-of-the-art technical and biomedical applications. These applications include silicon and glass wafer processing, production of nanowires, laser transfection and cell reprogramming, optical cleaning, surface treatments of implants, 3D nanoprinting, STED lithography, friction modification, and integrated optics.
The book highlights also the use of modern femtosecond laser microscopes and nanoscopes as novel nanoprocessing tools.

Includes a tutorial on materials nanoprocesing with lasers and a foreword by the nonaphotonics experts Satoshi Kawata (Japan) und Min Gu (Australia).
A comprehensive reference for modern nanostructuring applications in engineering and biomedical desciplines.
Specialises on non-UV (such as near infrared) radiation from ultrashort laser pulses.

San Francisco/Jena– The International Society for Optics and Photonics SPIE promoted 28 new Fellows of the Society, among them the Nobel Prize winner William Moerner during the Photonics West conference, to recognize the significant scientific and technical contributions of each in the multidisciplinary fields of optics, photonics, and imaging. SPIE Fellows are honored for their technical achievements and for their service to the general optics community and to SPIE in particular. Nearly 1,000 SPIE members have become Fellows since the Society’s inception in 1955. The annual recognition of Fellows provides an opportunity for SPIE to acknowledge Members for their outstanding technical contributions and service to SPIE. König has made valuable contributions to the fields of multiphoton tomography, laser tweezers, microscopy, femtosecond laser nano-processing, and laser-based stem cell research. A key area of his research at Saarland University is material nano-processing based on near infrared femtosecond lasers. He is a full professor of Physics and Mechatronics, Department of Biophotonics and Laser Technology at the Saarland University in Saarbrücken, Germany and President/CEO of the company JenLab GmbH. JenLab is unique in its production of clinical multiphoton tomographs and femtosecond laser microscopes or cell transfection. The significance of this company's work is evident in JenLab winning the 2011 the SPIE Prism Award for the best Photonics Product in Life Sciences. König is a well-respected, award-winning researcher with a strong international reputation of excellence. He has published 200 articles in refereed scientific journals, contributed more than 200 proceedings, and written 31 book chapters. His work has gained extensive support through competitive grants and has garnered 26 patents. He has been on the organizing committees of many international conferences and workshops in the area of biomedical imaging such as the Focus on Microscopy conferences and the 3rd World Conference for Cellular and Molecular Biology in Jena with 8 Nobel Prize winners. An active participant in SPIE activities, König was co-chair of the SPIE Multiphoton Microscopy in the Biomedical Sciences conference of 2010, which was one of the most successful conferences in Photonics West in terms of participants. He has been chair or co-chair of that conference since then. Since 1992, he has published more than 120 papers in SPIE-related journals and conference proceedings. His first paper on multiphoton microscopy imaging of skin, published in the Journal Biomedical Optics in 2003, has more than 300 citations. He initiated the JenLab Young Investigators Award three years ago and has contributed every year since then to that award. SPIE is the international society for optics and photonics, a not-for-profit organization founded in 1955 to advance light-based technologies. The Society serves more than 235,000 constituents from approximately 155 countries, offering conferences, continuing education, books, journals, and a digital library in support of interdisciplinary information exchange, professional growth, and patent precedent.

Humans could reach Mars in the next 20 years. Professor Karsten König of JenLab explans the danger such a spaceflight could pose to the health of an atronaut's skin.