February 2012 Investigate new technologies that are being developed to detect melanoma early. http://www.xplorehealth.eu/en/media/skin-cancer-exposed
Dr. Jesse W. Wilson from the Duke University wins the JenLab Young Investigator Award 2012 including $2000 cash and a trip to Germany 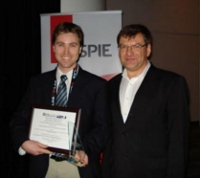 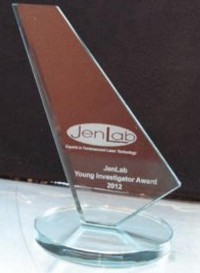 The JenLab Young Investigator Award was presented during the SPIE conference Photonics West at San Francisco to Dr. Jesse W. Wilson for his paper titled: "In-vivo pump-probe microscopy of melanoma and pigmented lesions." The $2000 cash prize was donated by the JenLab GmbH (Germany). The members of the Review Committee have chosen two finalists among the applicants: 1. B. Sc. Hod Dana (Technion, Haifa, Israel, B.Sc. in Biomedical Engineering in 2007) 2. Dr. Jesse W. Wilson (Duke University, USA). Both finalists presented their work as oral presentation during the Multiphoton Microscopy Conference. During the award ceremony, Prof. Karsten König, president of the company JenLab GmbH, invited both finalists to visit Germany and to present their outstanding work as invited speakers during the International Workshop on Modern Lasermicroscopy FLIM2012 in Saarbrücken in June 2012 (www.flim.ws). Dr. J.W. Wilson was selected as the first winner of the JenLab Young Investigator Award. Dr. Wilson received the B.S. degree with a double major in electrical engineering and computer science in 2004, the M.S. degree and the Ph.D. degree in electrical engineering in 2007 and 2010, respectively, from Colorado State University. He works as a Postdoctoral Associate in the group of Prof. Warren Warren at Duke University in Durham, North Carolina. His award-winning research method is in vivo two-beam multiphoton microscopy of intratissue eumelanin and pheomelanin based on pump-probe spectroscopy. Individual melanocytes have been monitored in a human skin xenografted mouse model using an RF-modulated pump pulse train at 720 nm, an unmodulated probe pulse train at 820 nm, and a lock-in amplifier. 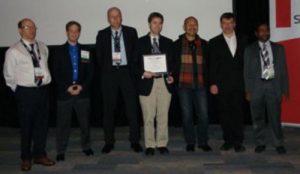