Monitoring stem cells in their natural physiological environment is crucial to understanding stem cell ­differentiation and the generation of tissue. We applied high-resolution 3D multiphoton tomography in order to non-invasively visualize the stem cells of hair follicles. Single nestin GFP-expressing stem cells were tracked for up to five hours in living transgenic mice. The microenvironment was monitored by two-photon autofluorescence and second harmonic generation.

On Monday, October 9, 1989 on the 'day of decision' in Leipzig, Karsten König and Reinhard Tauchnitz from Jena and Leipzig respectively, boarded a train to Moskow at Berlin-Ostbahnhof carrying 60 kg backpacks. The East German mountaineers intended to pass illegally through Tien-Shan in Soviet Kyrgysztan to China and from there move on to Tibet and their dream. 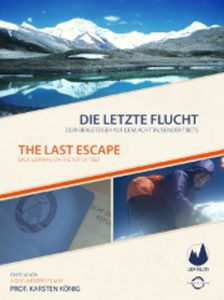 The last escape
This is one of the last escape attempts in the history of East Germany - and one of the most spectacular. Two mountaineers from Jena and Leipzig will attempt something that no East German has ever tried before: an escape over one of the highest mountains in the world. The adventure takes them through Russia, China, Tibet as well as the riots within a collapsing East Germany, up until the fall of The Wall.
About this film
November 9, 1989. The Wall comes down, marking the end of the Cold War. 25 years later, this documentary was made. It is based on an interview held on the factory floor of the former Kloeckner-Humboldt-Deutz company in Cologne-Muelheim in October 2013, on historical pictures and film material from 1989 and 1990 as well as film material from the recent ascent of Shisha Pangma by an international professional team in 2009. 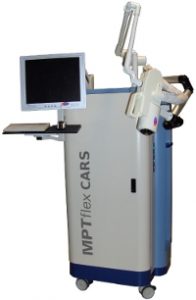 The scientists and engineers of JenLab have succeeded in developing the first flexible clinical CARS system. The new laser tomograph enables a precise look into the skin within seconds and provides high-resolution optical biopsies without tissue removal. Staining of the skin is not required. The tomograph is based on nonlinear Raman imaging (CARS: Coherent Anti-Stokes Raman Scattering), multiphoton autofluorescence and second harmonic generation. Single cells, cell organelles as well as elastin and collagen can be imaged with sub-micron resolution and with additional chemical information. In vivo multiphoton tomography has become quite a promising method for early cancer detection, therapy optimization, and evaluation of cosmetic and pharmaceutical products under natural physiological conditions. It can be used to determine the skin ageing index and the lipid distribution as well as to evaluate the effect of anti-ageing products. The new CARS tomograph is currently employed at the Charité in Berlin for the detection of chemotherapeutic agents in the skin of cancer patients and to test the effect of antioxidants in the treatment of the hand and foot syndrome. Multiphoton and CARS imaging has the potential to provide in future label-free optical biopsies within seconds without tissue removal.

Furthermore, surgeries can be assisted e.g. to localize tumor boundaries. JenLab was found in 1999 as a spin-off of the University Hospital Jena and is the pioneer in medical diagnostics systems based on femtosecond laser technology. JenLab's tomographs are used in Australia, California and Europe for the detection of malignant melanoma. Leading cosmetics manufacturers in Japan, US, and Europe employ JenLab products to evaluate the biosafety of nanoparticles in sunscreens and anti-aging products.

PhD student Alex J. Walsh from the Vanderbilt University wins the JenLab Young Investigator Award 2013 including $2000 cash and a trip to Germany 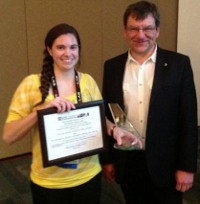 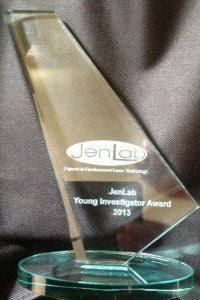 The JenLab Young Investigator Award was presented during the SPIE conference Photonics West at San Francisco on February 5, 2013 to Alex J. Walsh for her paper titled: "Optical Metabolic Imaging of Macrosuspension Tumor Cultures Predicts Tumor Therapeutic Response" (Walsh, Cook, Arteaga, Skala). The $2000 cash prize was donated by the JenLab GmbH (Germany). The award was given the second time (2012 to Dr. Jesse W. Wilson). The members of the Review Committee have chosen two finalists among the applicants: 1. Murat Yildirim (The University of Texas at Austin, USA) 2. Alex J. Walsh (Vanderbilt University, USA). Both finalists presented their work as oral presentation during the Multiphoton Microscopy Conference. During the award ceremony, Prof. Karsten König, president of the company JenLab GmbH, invited both finalists to visit Germany and to present their outstanding work as invited speakers during the International Workshop on Modern Lasermicroscopy FLIM2013 in Saarbrücken in July 2013 (www.flim.ws). PhD student Alex J. Walsh was selected as the first winner of the JenLab Young Investigator Award. Mrs. Walsh received the B.E. degree in 2010 and the M.S. degree in 2012 in the field of biomedical engineering. In 2012, she published 3 times as first author in peer-reviewed scientific journals. Her award-winning research topic is two-photon autofluorescence microscopy for optical metabolic imaging of 3D organoid cultures of primary human tumors to predict drug response. 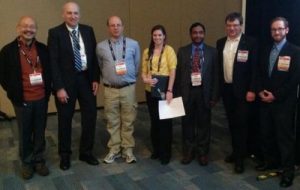