Multiphoton effects have been predicted by the PhD student Maria Goeppert in the twenties of the last century. However, it took more than 30 years to prove her theory. In 1961, one year after the discovery of the laser, Kaiser et al. demonstrated two-photon excited fluorescence. Shortly after the introduction of a first ultrashort laser microscope, Denk et al. published in 1990 on a two-photon microscope for cell imaging. Piston et al. and König et al. investigated the cellular autofluorescence and Masters et al. the tissue autofluorescence with a two-photon microscope. In 2003, the first peer-reviewed publication on a clinical two-photon imaging system, a so-called multiphoton tomograph “DermaInspect”, appeared.

Later on, the CE certified tomograph MPTflex with an optomechanical arm and 360° measurement head was introduced by the company JenLab. Later the clinical two-photon GRIN lens microendoscope was launched. The introduction of a second NIR ultrashort laser beam provided the possibility to perform additional Raman imaging. 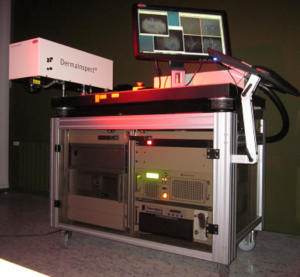 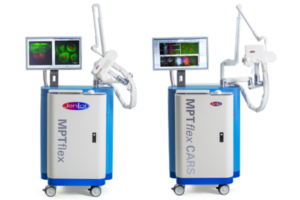 View all posts by: s.koenig